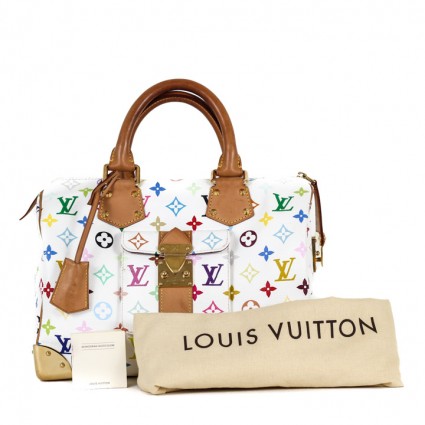 If you are a Louis Vuitton collector, this is one bag you must-have. This is a top quality and stunning Louis Vuitton multicolore monogram in white. The canvas was designed by the creative Japanese artist Takashi Murakami.

Made in France
Date Code SP0014

Pre-owned. This is a Speedy 30 multicolore in very good condition.  The canvas is beautiful and firm. The vachetta leather rounded handles and trimmings are beginning to turn into a lovely soft honey colour – no scratches or watermarks (see pictures for details). The piping around the bag is in very good condition and is evenly toned with no tears, rips or cracks. All of the zippers work perfectly and are beautiful and shiny. The brasswear all over the bag is stunning with a few fine scratches – not noticeable unless you go looking (see pictures for details).  The stitching is intact and tight.  Inside lining is perfectly intact and clean but has a slight odor. Comes with 2 keys and both locks on the bag are in working order  both are golden and shiny – no scratches.

Don’t miss this opportunity to own a top class collector’s item from Louis Vuitton.